In five months, I will be moving to Krenglbach, Austria, population approximately 3,ooo people. I wanted to learn more about this village, both its current state and its history, so I did a little research.

Krenglbach is a village located in the province/state of Upper Austria (Oberösterreich) about 9 km from Wels, and 44 km from Linz, which is the capital of Upper Austria. Linz is extremely well connected to the rest of Europe by rail, which will really facilitate all that traveling I plan to do! This map of Upper Austria shows how close I will be to Salzburg, Munich, and Vienna.

When I first applied to be an au pair, I thought that I wouldn’t be happy unless I was living in a city. As beautiful as Austria’s countryside is, living auf dem Land seemed like it might be isolating and lonely. But when I received my host family’s information, I started to rethink my preconceptions.  I am going abroad to really experience a different culture. While I will be a tourist in many ways, I want to engage with what the guidebooks call “the real Austria.” I’m not sure what they mean by that, but I want to  be a part of a community.

Krenglbach’s website gives a glimpse into what their community entails, with notices about the Settlers Club’s barbeque, the local choir concert, construction updates on the new Volksschule and even thevillage doctor’s office hours.

Living in such a small town is not like anything I’ve ever experienced, as I have mostly lived in cities (Birmingham, Atlanta, and Belfast). Between the ages of five and nine, I lived in a tiny town called Ruston, Louisiana. However, Wikipedia informs me that its population is over 20,000 people. So, Krenglbach may be a little bit of a shock.

Despite its small size, Krenglbach has a long history, beginning in 985 CE, when its name first appears in a list of baptisteries. Schmiding Castle (now the location of Austria’s largest zoo) was built around 1100, and Haiding Castle around 1340.

During the counter reformation, Maria Theresa established a Catholic mission and monastery, Reichersberg.

The village is also proud to claim that the hymn “”Es wird scho glei’ dumpa,” by Anton Reidinger was composed in Krenglbach in 1839.

The village was occupied by American soldiers in 1945, and in the past fifty years, Krenglbach has undergone a series of major renovations to historic buildings, including their parish church. 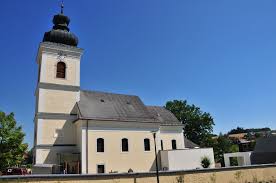 I guess the point of all this is to say that even the smallest places have history and interest if you are the type of person who seeks to get to know them. Moving abroad will be such a giant shift in my life that it will require a point of orientation, a place from which I will explore, and to which I will return. A home. From November 2013 to August 2014, that place will be Krenglbach.

Part 2  of “Wo/Where?” (coming soon) will include picture of the house/rooms in which I will be living!

It's autumn, and I've come to the last few months of my time in Europe. Looking forward to some short trips and the upcoming holiday season.