I have been lucky enough to visit Prague twice in 2014 (and once in 2011), and it has become one of my favorite European cities. It’s super accessible to me, only a four hour bus ride from Linz, and has a ton of cool sights, quirky museums, literary history, and gorgeous outdoor spaces. Plus, it’s significantly less expensive than other European capitals, especially if you stay outside the center and shop in grocery stores (which are my two main tips for budget Europe anyway…). I stayed in a cool hostel (cleverly called “Czech Inn”) on one trip for only €6 a night! So, if Prague isn’t on your radar, it should be. Here are some of the places I’ve explored so far.

If there is a quintessential Prague site, it’s this amazing bridge. Best enjoyed early in the morning, before the tourist hordes descend, or around sunset when the castle is first lit up, it is a cobbled pedestrian bridge lined with imposing religious statues. It connects the Old Town area with the “Lesser” Quarter (one of my favorite parts of the city) and just has this special feeling about it–when you’re walking along, if you can mentally erase the souvenir sellers and tourists, you could be at any point in history, from medieval times to the Soviet occupation.

This is the largest castle complex in Europe, and home to the imposing St. Vilnius Cathedral. I have yet to go inside the buildings, but just wandering around is a worthwhile experience. You really get the feeling of a fortified castle/village, as well as some interesting shops and restaurants. But the best reason to trek up there (like most castles, it’s at the top of a formidable hill–but you can take the tram!) is the view.

If you’re in to Kafka, history, legends, cool architecture, or amazing coffee, you need to check out Josefov, Prague’s Jewish District. Before WWII, there were such districts in all European cities, but Prague’s is one of the most complete surviving, because Hitler intended to preserve it as a “monument to an extinct race.” Ponder on that for a second. There is also an amazing legend about Rabbi Loeb and his Golem, which protected the Jews in this area during the Middle Ages. Check out the story here.  You can also visit one of the largest Jewish cemeteries in Europe and several beautiful synagogues.

This is probably my favorite part of Prague. It’s as charming as the Old Town Square, with probably a quarter of the tourists. It’s home to the Kafka Museum, old city walls, lots of enclosed beer gardens with reasonably priced food, and my favorite English language bookstore, Shakespeare and Sons (not affiliated with the famous Paris location). Inside the bookstore, there is a great mixture of used and new books, a comfy reading room with leather chairs, and basically pure happiness.

[Tangent: After living in Austria for six months, I starve after English. I mean, I speak it on a daily basis, but I am in so love with the language that now that I’m not fully immersed, I can’t get enough of it. I guess, as your quintessential English major, my language is an intrinsic part of my identity (do other people feel this way?). I’ve read over sixty books since January (I can borrow books from my library at home via my e-reader), but there is something about going in a bookstore and picking up a volume to flip though that can’t be replicated digitally.]

Anyway, the lesser quarter. Last time I was there, I read half a book in Shakespeare and Sons, heard an amazing jazz quartet playing on the street, and then ate one of my best meals in Prague. I’m a fan.

This is where all the tourists are, and rightfully so. It’s a beautiful square, ringed with stunning architecture, the famous astronomical clock, and full of street performers. It’s a lively meeting place, there are street performers, the Christmas and Easter markets happen here, it’s great. You definitely won’t miss it. But don’t eat here, okay? The food is easily double the price you’ll pay anywhere else.

I feel like this is a very misleading “attraction.” It isn’t really a square, it’s Prague’s main shopping street. Here’s where you’ll find all your favorite European department stores, alongside McDonalds, KFC, and Starbucks. The big attraction here is the Czech National Museum, but it’s undergoing major renovations and probably won’t be reopened until 2017. So, while you should definitely check the “square” out, it’s not your best sightseeing value, in my opinion.

I don’t think this is “real” sight, but I’m obsessed with it. It’s about as close and personal as you can get (or would want to get) with the river and the giant swans that swim it. Over on the lesser quarter side of the river, near the Kafka Museum.

If you are into Art Nouveau (Jugendstil) architecture, you have to visit the Municipal House. It’s a concert/performance venue, but the real draw is the gorgeous cafe. It’s expensive (for coffee and cakes), but totally worth it. Order a coffee from one of the tuxedoed waiters, and be transported back in time. One of my favorite Prague experiences so far.

It’s weird, it’s melancholy, it’s insightful, it’s Kafka. If you haven’t read any Kafka, it’s not worth it, but I visited right after finishing The Trial, and I was totally enamored by the artistic and thoughtful exhibits. For example, the one based on The Trial is seemingly endless winding halls of file cabinets, with disconcerting slanting walls, and drawers that pull out and reveal interesting tidbits about Kafka’s own experiences with with surreal world of bureaucracy. I loved the dark cartoons Kafka drew while working in an office. One caveat–a lot of the writing is in Kafka’s original German and not translated. All the captions and other historical information is available in English, though. If you’re a fan, it’s a must-visit. 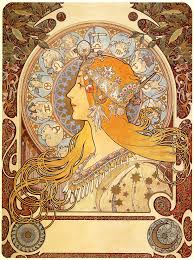 This is a small museum, but it’s worth it if you are interested in Art Nouveau, poster design, or one of the great artists of the Czech Republic. There are some of his famous portraits of Sarah Bernhardt, as well as some of the pictures you’ve seen on a thousand calendars, but the best part are the political and cultural art that Mucha created for Czechoslovakia. His story was really inspiring to me, and there was a short documentary (in English) that helped bring it all together. Also, if you visit this museum, you get a discount at the Kafka Museum and vice-versa!

You can go see classical concerts in the lovely “mirror hall” of this former Jesuit College, but I opted for a guided tour, which included the mirror hall, the old library, and the astronomical tower. I thought it was really interesting, especially learning about the centuries-old library, which is currently being digitized for public access. But the highlight was easily the (slightly dangerous) climb up a rickety wooden staircase (more like a ladder) to the top of the observation tower. The view of Prague’s spires and red rooftops was spectacular.

Two times now, I’ve visited Prague at Easter time, and I think it’s really special. The smoke (and smell) of cooking ham fills the air, and the Old Town Square is filled with colorful, decorated trees. There are also thousands and thousands of those intricately decorated eggs. Plus, there’s just something about a market. I plan on going back to Prague in December to see the Christmas Markets, and I expect to love those too.

The last place I would like to mention is the Rudolfinum, a concert venue that I have never visited. However, I have been right next to the building in a lovely little park with a view of the river, perfect for a snack, a rest, and a little reflective time. Unlike a lot of cities, Prague does not lack for green places to sit and think–even in the middle of the tourist center. If you get a chance to visit the capital of the Czech Republic, you should check out all the cool sights and learn a lot, but also just take some time to absorb your surroundings, to appreciate the beauty.

I could never get tired of this view.

Prague Castle at dusk, from the Rudolfinum

It's autumn, and I've come to the last few months of my time in Europe. Looking forward to some short trips and the upcoming holiday season.